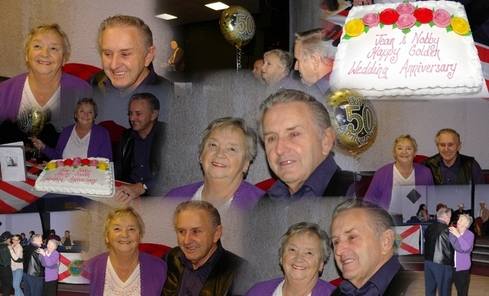 We all joined the MK Divided Club when it first started at the Gladiators – Bletchley…. around the mid  1970's.  The Anniversary dances were always held at the Wilton Hall Bletchley with 2 bands & buffet.  Many  of members wore western gear and there was a shoot out by the “Wild Bunch”. We hired coaches and visited other clubs ( ie  Chicksands Air force base and a club in Oxford).   The President of the club was Warren Reeves and the late Pete Sayers,   we then had to move to the Railway Club then later on to the Working Mens Club and now in Jan 2023 to Longueville Hall where we are still enjoying  Mk Divided Country Music  Club   -  run very successfully by John & Trish.     Nobby and Jean 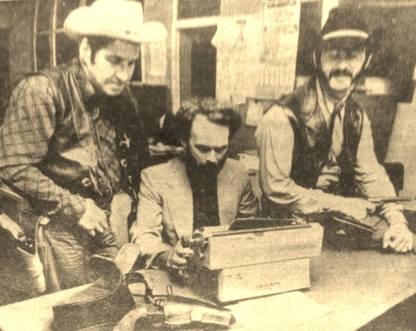 Brian (the Kid) Holden Hank Cameron and Bushwack Ratnage rode out to Blakelands to meet their destiny at Two Mile Ash…. As the gunslingers pounced … spurring their mounts over Beanhill the crossed the Old Brook guns blazing ….Yep folks its cowboy time here in the new frontier town of Milton Keynes … They’re leading the fight for what’s right the establishment of law and order … and a Country and Western club

Whether it’s old country music or new country music, whether for listeners or dancers, whether it’s freestyle dancing, rock ‘n roll/jiving, partner dancing or line dancing, MKDivided’s relaxed, inclusive approach accommodates most tastes and preferences in an easy, laid-back ‘come and join us’ style.  But way back when . . . 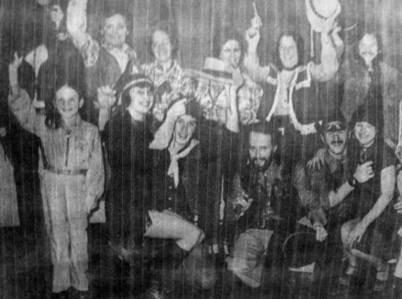 The year in which The Day of the Jackal and The Wicker Man captured cinema audiences, George Foreman was heavyweight boxing champion, and music charts were dominated by The Osmonds (Young Love) and Tony Orlando and Dawn (Tie a Yellow Ribbon), three MK friends sat around a table at the Compass Club in Bletchley.

The music that Brian, Melvyn and Gordon had in mind wasn’t Gary Glitter, David Cassidy, Wizzard or Elton John in the pop charts that year, but George Jones (What My Woman Can’t Do), Merle Haggard (The Emptiest Arms), Anne Murray (Danny’s Song), Waylon Jennings, (You Can Have Her), Lynn Anderson (Keep Me I Mind), along with Charley Pride, Charlie Rich and a pair of Duelling Banjos.  The occasion was a country music charity evening Gordon Rattnage had arranged.  Along with Melvin Cameron and Brian Holden, the trio where part of a group of twelve or so local country music fans who travelled to music clubs in Banbury, Oxford and North London. Money changed hands that night as the three agreed to chip in £10 each for printing and advertising, to see if they could start a new country music club in the town.  £10 in those days was half the average weekly wage for many.

Looking for a venue, they settled on The Gladiator Club, then the home of Bletchley Football Club at Manor Fields.  To get the proposed club off with a bang, the trio decided to hire the Wilton Hall in Wilton Avenue, Bletchley as their launch pad, but were worried about the costs – around £100 for the hall, advertising in the Gazette, and the £75-each cost of two groups: Kentucky County, and Jess and The Gingerbread Men.  (Many won’t remember that Jess was Jess Owens, the father of British actor Clive Owens.)

Some dressed in country gear others didn't  hence the " divided " title

All three breathed a sigh of relief later that evening: they’d sold 320+ tickets at £1.50 each –  and MK Divided s born.  In the following weeks the alternate Sunday nights at The Gladiator proved to be sell-out popular.  With acts like Johnny Carter and Moonshine County, First Chapter, and Ann and Ray Brett, you had to be there by 7:30: the venue had a capacity of around 130, was always packed, and the doors had to be closed to late-comers. The Gladiator was furnished with banquettes in the style of an American speakeasy, with a railed balcony around the walls – an ideal country music setting.

At that time there was no line dancing, everyone doing their own thing: rock and roll, jive, bopping and free-style.  But most members wore some western costume, from a shirt and a hat, to full western regalia.  And there wasn’t only music: guns too!  In the interval there was a Quick Draw competition, run by The Wild Bunch, a western cowboy re-enactment group.  The committee members in those days included Lila and John Drinkwater. Gordon, Melvin, Big John Drinkwater (no relation), Brian Holden and Bill ???   In those early Gladiator days, parties from the club would go to the annual three-day Country Music Festival organised by Melvin Conn at Wembley to see artists like Tammy Wynette, Dolly Parton and Boxcar Willie, and regularly hired a double-decker bus to visit London clubs.  With these trips away, the core membership of the club seemed sometimes to be more of a social club who liked country music.   When an English country music artist lost fingers in an industrial accident (BH who??? 1975/76??) the Club decided to arrange a charity event for him, hiring a huge marquee as MK didn’t have a sufficiently large venue at that time.  They lined up seven groups to play the afternoon and evening, free or just for expenses.  Unfortunately the club had over-reached itself, with only 200 attending at £1.50 per head. With the marquee costing £600, ground hire and other expenses, bankruptcy threatened the club.  Disaster was averted when mystery donations arrived from two other clubs.  The sources never revealed themselves.

Soon afterwards the committee and helpers arrived early one night to set up at The Gladiator to find a full-size snooker table square in the middle of the dance floor.  Resourceful as ever, the night went ahead, with dancing round the table!  Fortunately the British Rail Social Club in Bletchley was available, so the club upped sticks to take up residency in the Station Approach premises, their home until autumn 2010.   The venue proved popular, with around 240 people in each fortnightly Sunday, with the doors regularly closing at 7:30 from full house attendances, listening and dancing to trios or larger groups.  Not long after locating to the BRSC, the club lost Big John and John Drinkwater to illness, and the committee gradually shrank to Brian Holden (Treasurer) looking after the finances and Gordon Rattnage as Secretary booking the groups.  Maureen and Ray, Brian’s sister and brother-in-law helped for 10 – 12 years, before retiring to Devon.

One Whitsun weekend in the 1980s, when Bill rang the Nottingham Lace Market venue, he heard of a big meet drawing in people from the surrounding area, all dressed for the occasion: Indians, Cowboys and US Civil War soldiers.  Bill made more contacts.  Bill in the 1980s was Whilst working for the Brian Currie business in Milton Keynes when, one day, a customer who was getting married said they were looking for western dress.  Bill helped out, with Big John, and through him happened to learn that there was a country and western music club in MK.   This was MK Divided, at the British Rail Social Club premises.  Bill went to the Club with his daughter Nicola, and found a card on the table: “If you want to learn to dance . . . ring this number.”

The Wild Bunch, in western gear and with their Quick-Draw competitions, were a regular feature at MK Divided, and helped to swell the otherwise low numbers.  Around the time the Wild Bunch moved on, Bill and a large proportion of his 100-plus dancers started attending Club nights, and were welcomed with open arms.

When Gordon Rattnage suffered a stroke it consigned him to a wheelchair around the turn of the century.  Gordon continued to attend up to 2008; then another stroke followed.  With Gordon’s retirement Brian continued with Anne’s help, and other stalwarts included the Peppers (Nobby, Jean and Dot).  Dawn and Carol were also in the team, managing the doors since moving to the BR Club.   Brian Holden recalls that the club has never missed a fortnightly Sunday date, so claiming the title of “longest continuously running country music club”.  He remembers only three disastrous dates: one when the band was so bad the hall emptied by 8:30, leaving only embarrassed committee members; one when the Stewart Brothers and First Chapter arrived a tad late at about 9:00pm, and another when a band failed to show, so an emergency disco was hastily put on – Ian McDonald came to the rescue.  Brian recalls the arrival of line dancing at the club around 2003, with be-bop, jiving, waltzes and quicksteps gradually disappearing – even though Brian can still manage  some smooth jiving in a corner of the floor every now and again. There were also coach trips organised by committee member Sid Shadbolt, to enjoy real, authentic country music amongst enthusiasts with the American forces stationed at Chicksands and Lakenheath, with their American sweet corn buffets. 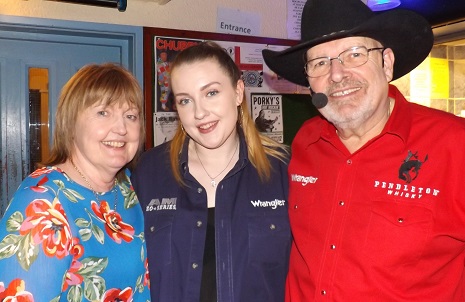 In the autumn of 2010, with the British Rail Social Club’s future uncertain, the Club obtained an invitation from Bletchley W.M.C. to use their hall, the Club held a vote of all members, and there was an overwhelming vote in favour of the move – one supported by founder Brian Holden 37 years after the Club’s birth.  So, with Brian’s endorsement, the Club’s continuity continued.

With the trials of Covid-19 in early 2020 the club was forced to close its doors during the lockdown.  The Bletchley W.M.C gradually fell into disrepair delaying the re-opening by several months but in January 2022 the club reopened its doors and the music played once again.  Unfortunatley during this year the Bletchley W.M.C building gradually deteriorated further and   closed its doors in December 2022 so findng a new venue for the new year was paramount.

In January 2023 a new venue Longueville Hall in Newton Longville welcomed MK Divided and its loyal members with open arms and the original ethos that guided Gordon, Melvin and Brian in those heady early days nearly five decades ago survives to the present: to support country music, making a profit merely sufficient to ride the ups and downs.

Nowadays country music and the new city get along just fine, and have for nearly 50 years – at MK Divided, the home of country music in MK  Whether it’s old country music or new country music, whether for listeners or dancers, whether it’s freestyle dancing, rock ‘n roll/jiving, partner dancing or line dancing, MK Divided’s relaxed, inclusive approach accommodates most tastes and preferences in an easy, laid-back ‘come and join us’ style.

This history is a “work in progress”. We would welcome any contributions that will help fill the gaps or add to the story, or any suggestions of someone who could help us. Just email, or tap me on the shoulder on a Club evening.